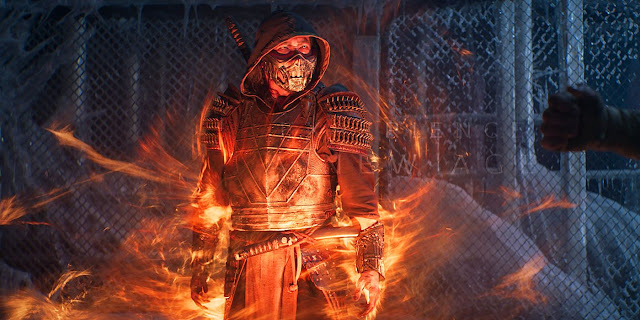 Who is this for?

What's notable about it?
Rating

Mortal Kombat, a HBO Max simulcast, has a pretty good view of the cresting sun of the streaming age. It’s a remarkable achievement for a franchise that first watched over the 16-bit video game ascendancy, when game dev finally got enough bits together to enter the uncanny valley of semi-believable lifelike representations. Mortal Kombat improved on Street Fighter’s fixed frame sprite tech by using live actors in something akin to motion capture, lending an unusually high degree of fidelity to the look and feel of the pugilism simulator in 1992. This landed it in hot water, as unlike Street Fighter, fights tended to end in bloody mayhem. Offered the chance to FINISH HIM after a successful match, characters like Scorpion and Raiden could impale, dismember, and disintegrate their realistic looking opponents, throwing out chunks of red pixels on stark occasion even if most ending moves were rather mild. This brutality caught the eye of parents nationwide, or I should say was advertised directly towards them in an attempt to use cultural cache to boost sales - Mortal Kombat was part of the first wave of video game marketing that tried to portray games as mature and cool, rather than fantastical distractions. Said parents rabble-roused and blamed video games for the ills of today’s youth, which eventually led to the ESRB videogame rating body. It was all rather ironic because it’s highly doubtful anyone’s parent would ever be able to win a single match in these old games, let alone pull off a fatality, and the same is true for most kids. These games were hard. The entire controversy was manufactured around a game you could pretty easily just not buy for your kids based on the title and boxart alone (this was way easier in 1992). Nonetheless, because of this Mortal Kombat’s cultural wake was much larger than the mechanics of the game itself. This similarity to the Roger Corman style shock marketing of yesteryear led directly to an adaptation that I believe holds the record for shortest gap between game and non-tie-in movie. It was a decent 1995 kung fu film by Paul “Not the good one” Anderson that is remembered mostly for a banger track where someone screams the name of the film (this song is better than it sounds).

All this preamble brings us to the 2021 film by newcomer Simon McQuoid, a necessary discursion as the film itself is not particularly rich. It’s a pleasant fan service laden distraction, probably a perfect sacrifice for the Time Warner streaming gods, made in barren warehouses and foam temples with less than 4 people on screen at any particular time. The empty sets echo the pandemic even though the movie does not directly address it. Perhaps a result of this pandemic scramble, the production seems surprisingly cheap at times. Taking cues from it’s almost 30 year old predecessor, slightly off looking CGI accentuates a lot of the set design and the aesthetic is decidedly “video gamey”. The plot points truck on a similar convenience, creating a sort of perfunctory dialogue - teleport - fight rhythm that strongly reminds me of games from the early 00’s and their inability to mesh cutscenes and gameplay. Not that Mortal Kombat is shy about what it is doing; it directly quotes the games in both style and substance many times, having characters yell catch phrases basically out of nowhere and building visual cues into the fights. It's a video game - movie that's still mostly the former. That being said, the lowered stakes of the streaming format are a perfect match. We’ve been promised 4 or 5 more of these and you don’t even have to get off the couch to stay in the loop. Like a television series, it doesn’t bother to tell a complete story, leaving us on a rather obvious cliffhanger. The one gamble it makes is by giving us the prequel movie first, before we even get to the eponymous Mortal Kombat tournament, which is putting a lot of trust in it’s relatively blank audience stand-in main character. I actually like this actor here, he has the best timing of the cast all of whom are trying to sell some truly awful dialogue, but both his fighting style and background are painfully generic. I hope the writers didn’t spend too many long nights coming up with an okay guy who wears a fancy sweater and loves his family. Luckily protagonists rarely make or break these kinds of movies.

Antagonists tend to make or break these pictures, and in this respect Mortal Kombat has much in common with AMC’s Enter the Badlands, another ridiculous kung fu story that was decently shot. The feel is somewhere in that midlevel between TV show pilot and B-movie, but with surprising production value. And like Enter the Badlands, Mortal Kombat gets almost all of its uniqueness from its villains. Both Sheng Tsu’s malevolent sorcerer and the ice king SubZero are nicely played as full court press bastards here, but jerky Australian Kano entirely steals the show. Openly contemptuous from minute one, Kano mocks our heroic cadre for pretty much half the movie and provides much needed grounding to the ridiculous events. He also is the only spark of joy in what is a pretty dour happening for the rest of the cast (most everyone else is losing limbs and family members for the running), excitedly exclaiming with glee when he digs up his super power and generally enjoying trying to knife whatever appears in front of him. Everything with this character hits, and his devil may care slice and dice’em attitude is true to the source material.

The other quintessential Mortal Kombat quality is brutal violence, which the movie strategically deploys. As argued above, brutality is really Mortal Kombat’s signature in cultural memory, and this 2021 movie broadcasts that knowledge by slowing down fights to cleanly show finishing moves. Just like the games it’s not particularly awful, often the stabbings come across as almost comical after the choreographed weapon twirls and fancy stage rolls that immediately precede them. It’s worth asking then, is it really necessary to see people dismembered or stabbed in the face? Yes. Yes it is. For all of the fear-mongering of the early 90’s (what were kids supposed to mislearn exactly? How to breathe fire at inappropriate times? How to rip out a spine?), creating a conclusion to violent contests is actually the most realistic possible creative choice, even if it was made for the director here by the demands of their property. Would anyone think twice about letting a 14 year old watch a Bond film? Yet those movies are filled to the brim with summarily executed Eastern Europeans and torture. The difference is in Bond’s world, Bond is indestructible and undefeatable, an agent mostly free from consequence. He “finishes” hundreds, in a fictional context implied to represent actual covert operations, and it’s mostly depicted by the people slumping over or yelping once in bloodless surprise. Bond even often uses silenced guns so as to further not offend your delicate senses. Mortal Kombat, in it’s adolescent bloodlust, brings the consequence of violence back into view. People are maimed and murdered, and it’s not very pretty when it actually happens. Getting beaten until you literally cannot stand is super bad for you, and when the pugilist is doing it as part of some criminal enterprise or intergalactic struggle, it probably will get worse even after defeat. In this way, Mortal Kombat actually has a philosophical edge on most video game violence idioms, including its more popular older brother Street Fighter, which tend to reduce fights into contests of will and respect. As if the police could just beat up criminals and leave them unconscious on the street, confident they had learned their lesson. As long as our entertainment chooses to depict violence, it should take a page from Mortal Kombat and preserve some of the nastiness inherent in the enterprise.