on February 03, 2021
2014 is officially kaput, so we’re back with another year’s end reminiscence. Television is a tough beast due to its fire-hose nature. If you take just the last three months, almost 50 new shows have premiered and have ratings on Metacritic. Now 50 new movies would be a lot of get through, but if we (very) conservatively estimate 10 episode runs of half hour shows, we’re still looking at 250 hours or 10 solid days of television to watch just the Fall half seasons.What I’m trying to say is again, I have not had time to catch White walker mania. Like last year this segment is more to comment on some of the shows and trends we’ve enjoyed in television during 2014. Here is some of the best television that radiated into the Synthetic Error offices during the year. 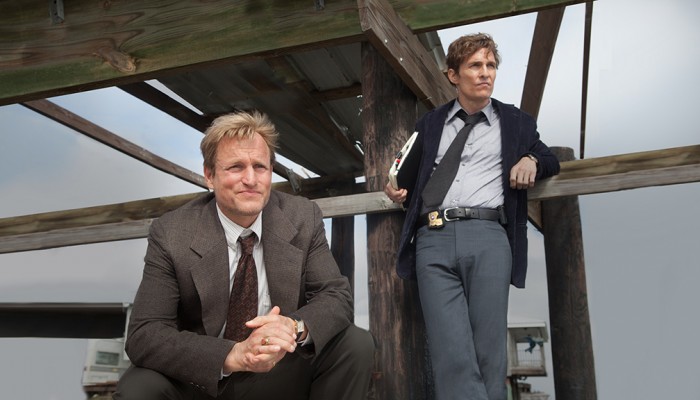 Show of the Year : True Detective

In many ways True Detective plays it pretty safe; star studded cast, murder procedural structure, and a season long mystery. The name is practically a prop name for a novel on a set background. But for eight episodes, all of which are confidently helmed by Nic Pizzolotto and Cary Fukunaga, True Detective sinks down into the filth of the bayou and oozes out an unbelievable amount of atmosphere. McConaughy turns in a career best performance as a burned out detective, partnering with Woody Harrelson on a bizarre case. Very similarly to the real-life 2014 podcast hit Serial, the story is framed a decade after the case was closed and finds the detectives picking through evidence and anecdotes with the knowledge of how the cards fell. This framing device lets McConaughy launch into bizarre soliloquies about his bleak world view, showstoppers that are delivered right alongside the their journey through the blighted underbelly of the deep South. Their hunt takes them through the decay of the poor communities along the Mississippi, regions that have been left forgotten to rot by the rest of America. HBO has always produced cinematic shows but True Detective really took it to another level, with innovative camera work, gorgeous cinematography, and commitment to letting the setting speak for itself. Usually television has a nervous itch to fill the silence, but True Detective calmly nailed the noir vibe. If you want to see evidence that television as a medium is all grown up, then look no further.

Did you notice we’re going through a bit of a sketch show revival? After Chappelle dropped both the mic and the crown nearly a decade ago, the scramble to replace him was quickly superseded by the backlash against his imitators. These days though we have Key and Peele, Amy Schumer, Nick Kroll, and shows like Portlandia firing on all cylinders. Kroll Show currently sits on top of the heap, a whip smart satire of all the (10 days worth of) stupid television shows that still somehow make it to air. Kroll surrounds himself with funny people, something other shows seem less willing to do, and is thoughtful enough about each bit that skits can often reference each other as part of a cohesive world. The veneer of television ridiculousness gives believability to even his most screeching caricatures, and his comedic style of blatantly stating the subtext works wonders here on the hypnotic subliminal dross he’s parodying. Although in the second season he’s become more comfortable with certain skits, he never lets them stagnate with simple repetition.  People’s stupidity stays constant but the tilt-a-whirl of changing channels and ratings chasing gimmicks keeps Krolls observations on our soporific delta brainwaves funny and fascinating.

The recent increase in production quality for TV shows has changed the field quite a bit. The mediocre action shows of yesteryear were campy baubles like the Six Million Dollar Man and the A-Team, which could be enjoyed for what they were but were always pealing at the corners. With the slow penetrance of computer generated images, we have very gradually witnessed the approach of convincing spectacle. The first awkward CGI shapes first lurched into being in sci-fi shows like Star Trek and Babylon 5. Now, after years of advancement CGI lends credulity to nearly every action format, including shows like The Walking Dead, which emphasize gritty realism but is entirely dependent on CGI for its zombie slaying hooks. One early adopter, the CW, has developed a whole stable of soft action shows enhanced by any generation of CGI on hand, such as Charmed, Smallville, and Supernatural. It should be little surprise then that they seem to be getting the hang of enhancing low budget action faire. Arrow, based on DC’s Green Lantern, is probably their slickest product yet. CGI arrows and explosions are mixed with parkour and pullups creating a pretty convincing facsimile of a vigilante fighting crime. Pretty white people still distract with their pancake makeup and melodrama, but the action is solid and has weight. If you can make it through the hacky dialogue, there’s even a pretty solid throughline of accountability in the writing. Nolan is done with the cape and is not coming back, so you might as well ignore the groaners and enjoy a guy in a costume punching people and tackling psychotic villains on the small screen in 2014.

One of Netflix’s many experiments has been a foray into animated comedy, with the story of a 90’s sitcom star coming to terms with 2014. Bojack Horseman, packing a star studded cast including Will Arnett, Aaron Paul, and Amy Sedaris, apes the popular cutaway style with some irreverent anthropomorphized animals. Bojack is also darkly cynical and dramatic, spending increasing amounts of time hanging out in the emptiness of Bojack’s washed up life. Late series plots double down on the idea that redemption is hard, maybe impossible. Doesn’t really sound like Family Guy anymore does it? Most likely, Bojack is the kind of show with that really wouldn’t play well with the metrics on broadcast television. Other Netflix pickups such as House of Cards and Orange is the New Black have demonstrated the company’s good taste, but these ensemble dramedies would work on any channel. House of Cards was even originally shopped to HBO. Bojack, on the otherhand, benefits specifically from Netflix’s genre carpet bombing, wherein they seem to be achieving broad audiences by targeting each subgroup individually. Bojack is not for everyone, it values a smirk over a laugh, but for the right audience it’s a streaming gem.