TV has grown up a lot in the last few years. After a few decades as movie’s developmentally challenged cousin, most TV has developed continuous plotting and great editing. Everything looks stunning now too. The only problem is it’s hard to find time to watch it all. Additionally TV remains the most subdivided of all the media; watching every great show requires multiple subscriptions or a $130 cable bill. So some of the things in the ivory tower missed my gaze, fair warning for those from Westeros. From what I did manage to catch, this year was dominated by a show with good chemistry. Without further ado-

Not much really needs to be said. Walter White’s saga has come to a close; as the last episode’s credits scrolled it almost seemed appropriate to turn the TV off forever. Vince Gilligan has created one of the first nearly flawless TV experiences, using the time the format gave him to tell a deeply complex story of personal suffering and pathos against the New Mexican backdrop of tweakers, vicious Jaurez cartels, and most importantly suburbia. Perhaps it played it safe in some respects, but season 5 was the perfect cap stone, an exciting and devastating desert ride leaving no loose ends or underexplored dynamics. Great shows have come before, but Breaking Bad is king. 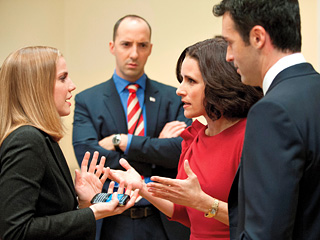 Julia Louis-Dreyfus continues her work as the standard bearer of ‘WTF?’ in response to the inanities and insanities of modern American government. VEEP’s first season skewered Washington’s squawking, indecision, and constant information control much like its overseas sister show In The Loop. The second season has expanded to give Louis-Dreyfus a more personal identity, a woman trying to follow her ambitions past creeps, losers, and sycophants, and meeting with middling success and boundless frustration. Although the ancillary characters are given a little less to chew on this season (with the notable exception of Mike who ends up out of his depth in his work and finances), Louis-Dreyfus remains a standout actress with great timing, explosive diatribes, and weary exhaustion in the face of D.C. politics.

Best Show I Can’t Believe is Still On: Portlandia

Hipster mania has come and gone. Hating them is passé and being one unimaginable. In 2013, Pitchfork chose the same best album as Rolling Stone, thick framed glasses are ubiquitous, yoga is more common than karate, and hipster runoff hasn’t updated since November. So what do Fred Arminsen and Carrie Brownstein still have left to lampoon? Well, just as hipster never really described anyone in particular, Fred and Carrie have taken hipster culture to really just mean enthusiasm, whether that’s for low carb diets and the heartbreak they cause, or judiciously attending birthday dinners. And it just so happens that whatever nonsense they’re riffing on, the Portlandia crew still remains stocked on unique jokes and bizarre interpersonal relationships. This is a sketch show that remains focused yet unmoored, never winking at the camera or having to explain the joke during an interlude. Even though you can’t just point to wood craft and laugh anymore, it’s still fun to spend time in Portland. 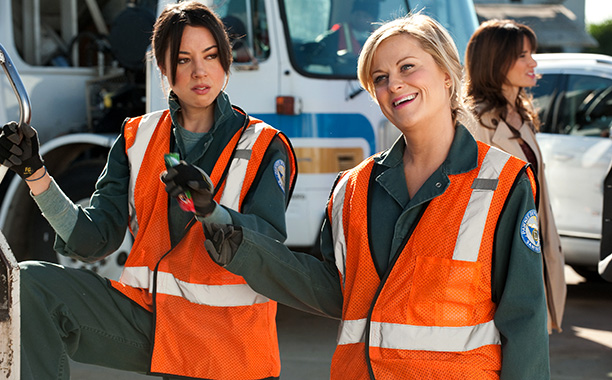 When Parks and Rec started, it was a refreshing change of pace from the staid Office formula. Even though it brought along the mugging for the camera and the underlining of jokes, Pawnie had a nasty cynicism about middle American life and the people who seemed almost dangerously oblivious to it. Perhaps nothing showcases that better than the awful way they treated resident scapegoat Jerry, dumping on the guy for no reason. However, in the modern Parks and Rec era, the cast’s treatment of Jerry got a redemptive storyline for the holidays. Well, show’s over folks. Parks and Rec is now running in full Office mode, hitting the requisite beats and calling it a day. While still funny in spurts, and smart enough to resolve its relationship storylines quickly, we’re subjected to the government mandated character growth in the last three minutes and most of the characters have become one note gags. It’s comfortable, but one cannot live on Swanson alone.