Without further ado, the final part of Synthetic Error’s Best of 2015 series. Here are the best movies of 2015:

2015 wasn’t much for drama, but this Hungarian film about the Holocaust dropped in at the last minute and punched me in the stomach. At least that’s how I felt. Son of Saul follows the already dead inside Saul (a beyond believable Géza Röhrig), a Sonderkommando, or Jewish death camp janitor, used for such tasks as unloading bodies from the gas chambers until the day he will find himself locked in. Although Holocaust movies might be considered derivative post Sheol and Schindler’s List (just to name two of hundreds), director László Nemes uses an ingenious conceit to make Son of Saul immediate; the camera is nearly always soft focused outside of Saul’s immediate area. We stay glued to Saul but just as he shuts out the surrounding hell, we can’t quite make it out either. The effect is startlingly powerful, making you feel claustrophobic and paranoid, trapped in this place with Saul. That empathy reveals the real terror, makes you feel it, the horror of what we did to each other as human beings. A powerful and important film, Son of Saul was the best of 2015 and is something that needs to be seen, even if you can only bear it once.

Suddenly showing up on the radar after years of kid movies, George Miller is all confidence in the new Mad Max. Tom Hardy somehow captures the eponymous brooding protagonist and we hold on with him through the white knuckle chase that follows. Mutated and bleached, yet filled with saturated beauty, this is the rare action film that doesn’t contain a single drab frame. Like a well oiled engine this film purrs, a nearly perfect example of exciting spectacle. Read my review here.

Sometimes a movie just gets into your head. It Follows, a macabre meditation on sexual maturity in the age of HIV and welfare, is also a synth laden tone poem to youth and fear. Using simple motifs and actions, it still comes together as a  surprisingly smart horror movie. The rules are simply, the thing is out there, always walking, always coming straight for you. Hold out with this film and you’ll be richly rewarded. Read my review here.

A clever and propulsive movie, the Argentinian film Wild Tales explores the animalistic chaos that swirls just under our ordered civilized surfaces. The anthology format is especially hard to do right, but Wild Tales simply nails it to the wall, along with our ego and vanity. Thematically consistent from tip to tail, it is also emotionally cathartic, a rare feat in any genre. Read my review here. 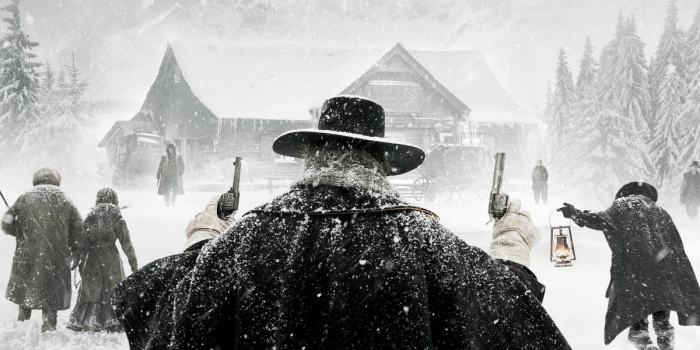 Tarantino wasn’t able to hang up his six shooter just yet after completing the stunning Django Unchained. He decided to go into overtime and craft this loving straight ahead Western, a gritty gunslinger tale about eight strangers holed up during a snowstorm in a log-cabin commissary on the frontier. Everyone is armed, and as the title implies, not everyone is happy. The cast is a Tarantino dream team, with Samuel L. Jackson, Tim Roth, Kurt Russell, and Michael Madson returning from Tarantino’s stable to slam dunk their deranged roles. Bruce Dern and Walter Goggins fit in great here, and Jennifer Jason Leigh gives an amazing performance as the kind of girl you really shouldn’t bring home to mom. Or let into your house. Or not be armed around. Unfolding in pieces over the course of 3 hours, the various interrelationships slowly collapse into confrontations. Here the characters drive the action, their glowering tension ornamenting the mystery. It’s worth noting that this really was a good use of the 70mm widescreen format, which lets you watch everyone in the cabin at the same time. No sudden moves…

Pheonix works at several levels. We find the main character, a woman (Nina Hoss)  who survives the horrors of the Holocaust just barely and tries to come scraping back to her old self. As she tries to remake her life she discovers that her German husband no longer even recognizes her. However, he does think she looks close enough to his presumed dead wife (her) that he thinks they could collude to scam for her inheritance. The result is a careful study in perception and identity, with the husband trying to teach her how to be, well, herself. Crowning the film is the stunning ending, a moment that will leave you slack jawed. Phoenix is a rare gem, a moody meditation more than a little reminiscent of Vertigo that becomes unstoppable once it gets going.

It’s easy to be cynical in the face of the Force. This is basically a monolithic money machine being curated by a theme park/toy company, which even before the time of the Empire shit out three tone deaf prequels with original honcho George Lucas in charge. We got lucky this time though, kid, because JJ Abrahms was young too when he took the original trilogy into his grey matter and he brings something maybe a little unexpected to this age of the blockbuster. It’s love, every frame shows he’s just got this pure love and reverence for the original space opera that set the world on fire. He knows what made the originals work and he hews closely, mirroring A New Hope in both tone and plot (to some’s dismay, but fine for me). The result is a great time, making clever use of newcomers Daisy Ridley, Adam Driver and John Boyega (each tweaked just slightly away from expectation), while juicing the nostalgia for all it’s got. It’s impossible to take the nostalgia out of this for me; I quivered with excitement when lightsabers were turned on and got a little misty when the Falcon showed up. Those feeling are volatile and could be made to turn against the film (as with the prequels), but The Force Awakens is able to handle them because it’s a good movie beneath the property. This was worth trotting out the old X-Wing.

Mostly a bottle film, Ex Machina is a stellar example of effective speculative fiction. Most sci fi films portray artificial intelligences as serial killers, perhaps due to a sort of slavish technophobe devotion to the grandaddy of murderbots, HAL9000. The problem is these films refuse to really engage with the questions about creating life. We edge ever closer to this sort of thing really happening, and our response isn’t going to be all Asimovian murder rules and sexbots. It’s going to be an emotional response, maybe paranoid, but also curious, intellectual. Ex Machina, which places the typically excellent Domhnall Gleeson across from Alicia Vikander’s uncanny android, explores these ideas carefully. This movie is what science fiction is really about.

9. A Pigeon Sat On a Branch Reflecting on Existence

You know what usually happens when something traumatic happens around us? We sit and stare, that awkward flight or fight machinery just jamming up in the face of complex social calculus. When the time for action finally comes, it is clumsy and stilted, often just passive resistance with moans of protest. It’s just who we are, but many films gloss over this and frame everyone as either background shrubs or ubermensch. The oddball “A Pigeon Sat…” revels in these moments, exploring the strange behavior of stood-up generals, door to door salesmen, and people acting bizarre or dropping dead in restaurants. The series of vignettes, each set in a vaguely dystopian 1970s modern city with anachronistic pastiche, stars a cast of dowdy hustlers (people-looking people, really) with caked white makeup to create a moribund vibe. Although the film remains mostly dower throughout, there’s hardly anything else like it. Watch it and know I’m glad to hear you’re doing okay.

The dark horse Oscar winner doesn’t really need my love, but Tom McCarthy’s film spins a part of our common history into an investigative yarn that is surprisingly gripping. The Catholic Church has been complicent in child abuse for probably centuries, but a few intrepid reporters were able to break it open so wide that no one would be able to ignore it again. An important tale but not a documentary, it mostly seeks to give some explanation as to why the Church was able to cover this sort of thing up for so long. Everyone is good in it, and it’s fun to see newspaper reporters playing the role of heroes. We don’t get enough of these kinds of tales, and should hardly expect more now from the age of internet journalism.

Here are a few more great films from 2015 in no particular order:

At under 15 minutes, World Of Tomorrow doesn’t quite qualify for the best of film category, yet it still happens to be probably the most topical and prescient work about our rapidly modernizing human condition on the list. A hilarious screed about how technology shifts both our priorities and our thresholds for barbarism, it is the must see on this list since it could be completed during a bowel movement if you have Netflix.

Hard To Be A God

Hard to recommend and even harder to sit through, Hard To Be A God is a formalist exercise in defiance of narrative. Though the underpinnings seem explicit (future anthropologists secretly observe a sister world going through it’s own Dark Age), the Russian film instead leans heavily into a squishing oozing medieval chaos caked in mud and blood. Although the film utterly fails to indicate what the hell is going on, it completely succeeds in showcasing life in a low tech serfdom dominated by paranoia and classist whim.

What We Do In The Shadows

It’s rare that a really good comedy film can get made these days, with the huge brain drain going into television, but What We Do In The Shadows is one of those rare comedies that actually really frigging works. From sun down to sun up, the vampire mockumentary hits moment after moment. It should be no surprise that awkward superstar Jermaine Clement is anchoring the piece, but the whole cast through to just normal guy Stu is excellent and on point. It’s dense enough to even be rewatchable, and I can’t think of the last straight up comedy that fit that bill.

Hey remember when you were really angry about all that shit that happened in 2008? Prepare for a crash course in just how shitty everything really was. An obvious dramatization of the subprime mortgage crisis (invest bankers learn how overextended American credit is from quizzing strippers in the movie…), it nonetheless doubles as a rapid fire history lesson, one way or another disseminating facts about the junk bonds that brought America to its knees and using fourth wall breaks to carefully explain the financial manipulations that were originally crafted to be too obscure to understand. The rogues exposing the system in this case are played by a number of enjoyable actors like Christian Bale and Steve Carell, although I take issue with their implied outrage and heroism. Each of the rogues ends the film by making millions or billions selling the housing market short, using their predictions to reap cash off the crash and burn of a million homeowners. Still, the Big Short is effective in showing how capitalism will take a foot from an inch when left unchecked.

Keep your head down and see you next year.